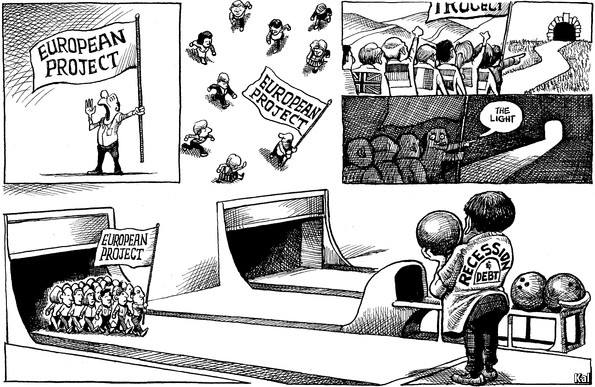 AE specials on the EU financial crisis continues with “The chicken or the egg?”.  Follow European Impact every Wednesday to read more.

Seven years ago, one of the biggest financial market shocks in the history of the world struck economies all over the world. In the European Union this meant one thing: the Euro zone was going to face its first real challenge since its creation in 1999-01. What were the causes? How did it affect the Euro zone and its MSs? Did the EU find any solutions?

The countries on the periphery of the Euro zone, Greece, Ireland, Portugal, Spain and Italy (GIPSI), faced dramatic consequences during the EU financial crisis that consequently affected the other economies of the area. The political debate around the reasons for this can be summarised as follow: on the one hand, the countries particularly affected usually criticise the rigidity of the rules imposed by the European Monetary Union (EMU); on the other hand, the others, the core countries of the Euro zone (Germany, France, Benelux, etc.) attribute the cause of the dramatic consequences of the crisis to the lack of discipline of the GIPSIs policy makers. I believe that both sides are partially right. In this paper I attempt to explain the causes of the impact of the crisis on the Euro zone through two theses that criticise two different aspects of the Euro zone: the loss of competitiveness of those countries and the institutional settings that regulate the Euro zone.

The analysis of the loss of competitiveness helps us to understand in which economic and cultural context the Euro zone MSs were (are). It has been observed that the Euro zone has been affected by a loss of competitiveness, in part due to the development of emergent countries, in part due to internal imbalances caused by cultural economic differences and due to the weak integration of the European Economic Union. In particular, this loss has been higher in the peripheral countries of the Euro zone. From 2000 to 2012 the unit-labour costs in the GIPSIs countries increased by more than the 30%, in comparison to less than 10% in Germany. To understand why it is necessary to describe the “context”: there is a cultural difference between the GIPSIs and the core countries in the way they face problems (Jones 2009, Salvatore 2015). On the one hand, GIPSIs used to respond to the loss of competitiveness (and recession) with the devaluation of their internal currency and/or by increasing their deficit. The devaluation allows for an increase in liquidity on the short term, but it induces inflation. On the other hand, core countries would avoid the devaluation of the internal currency, due to their “inflation phobia”, and use re-structural reforms of their economies to adapt their competitiveness to the economic cycles. This includes, lower public expenditures, more saving, contained wages and a stable fiscal regime to keep their debts and deficit as low as possible.

While emergent countries started increasing their competitiveness in the world markets, the introduction of the EMU progressively transferred the monetary powers from the MSs to the European Central Bank (ECB), with the idea that European economic cultures would converge one towards another (Jones 2009). Meanwhile, the ECB is in charge of the monetary powers of the Euro zone with the objective of price stability. In other words, to restore competitiveness in the Euro zone, MSs could only restructure their economies or increase their debts.

In the pre-crisis period, the loss of the GIPSI’s international competitiveness was overcome through excessive budget deficits and government debt, which prevented aggregate domestic demand, employment and growth from falling and thus plunging these countries into recession. When the crisis came, all GIPSIs experienced a high increase in debt and deficit, but instead of investing the deficit to restore competitiveness they had to face the crisis. Ireland and Spain, whose debts were low during the pre-crisis, had increased exponentially their debts in a short period of time (between 2009 and 2013 the Spanish debt increased by almost 40% and the Irish debt by more than 50%). Before the crisis, the bubbles in real estate were compensating the loss of competitiveness in Ireland and Spain, and they did not need to increase debt or deficit. However, in their period of economic growth they did not pursue the re-structural reforms necessary to face the explosion of the bubbles or the imminent crisis.

In resume, the GIPSIs did not have solid economies at the moment of the crisis.
Once we know the context, we analyse the response. In this paper we do not argue about the legitimation of the actions of the EU undertaken in response to the crisis. Instead, I point out that part of the causes of the development of the crisis are determined by the weakness of the Euro zone’s institutional setting that does not offer efficient tools to face recessions or financial shocks given the environment previously described.
The MSs, without a solid economy, would respond to the crisis only by increasing their liquidity. However, they cannot increase their own liquidity directly, because they gave this power to the ECB by agreeing to the EMU. When weak economies had to give a fast response to the financial shock caused by the default of Leheman Brothers, they were limited in their response. The fact that countries under stress were all in the Euro zone periphery and that they all had large public deficits, led the leading countries to suggest that the fault lay ultimately in the fiscal profligacy of both the private sector and governments. The leading countries therefore believed that fiscal austerity, and the reduction of public debt, the so-called “expansionary austerity”, would be the solution (Zezza 2012, Guajardo et all 2014). While it is true that a stock of debts represents the cumulated costs of the absence of reforms, a large-scale austerity policy does not necessarily overcome this contradiction, especially when applying them without making any distinction on the structural and institutional configurations of each national economy. Several economists, including the Nobel prize winners Krugman and Stiglitz, concluded that an austerity-generated recovery neglects the notion that strong effective demand effects might trigger a vicious circle of the cumulative loss of output and tax revenue, propelling a further and unintended explosion of the stock of the public debt/GDP ratio (Boyer 2012). The Euro zone responded to the crisis through a rigid imposition of austerity reform that lead to the stagnation of the GIPSIs economies – devaluating the internal economies in terms of spending reviews, wages, etc. This response lead to a domino effect on demand and on other indicators, and to a contagion effect on all the countries of the Euro zone (Zezza 2012).