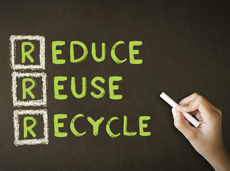 Albeit several setbacks and speculation that the once Circular Economy package might have been too focused on waste, the European Commission has ditched the set of six bills earlier this year for the sake of  «better regulation» – as declared by EU Commission First Vice-President, Mr. Timmermans.

However, the continuous hunger for materials and natural resources does continue. Every year, the average European citizen purchases several products; after what is considered today a normal span of time and period of usage, those products are consequently, linearly, thrown away. This is the classical «take-make-use-dispose» pattern of growth. Many of us do not know exactly where all «those» go, just picturing a blurry, rather vague paradise of dismissed objects; calm waves of peaceful sand made of products dust. This is not quite what happens in real life. The average European generated 481 kg of municipal waste in 2013; more than a half still goes to landfill or is incinerated (Source: Eurostat). An increasing number of societal actors, including individual citizens, have consequently been asking for a more respectful approach towards resources management. A bottom-up approach is exactly what characterizes the European Week for Waste Reduction (EWWR), together with a focus on awareness-raising.

The European Week for Waste Reduction is the biggest Europe-wide initiative aiming to promote the implementation of awareness-raising actions about sustainable resource management and waste reduction during a single week, the last one of November. It encourages all actors of society (public authorities, private companies, associations and NGOs, educational establishments as well as citizens) to get involved by registering actions. Actions implemented in the EWWR address the «3Rs»: Reduce waste, Reuse products, Recycle material, with the addition of Clean-up days. The «3Rs» represent the options which should be considered first in waste management, according to the waste hierarchy.

Each organizer of an EWWR action thus becomes an Action Developer, a protagonist actively involved in waste reduction initiatives and in spreading this message. What can everyone do to reduce waste in everyday life? First of all, being aware of what is happening. Secondly, getting involved by exploring around and approaching associations or networks already active. Everyone can also start (or continue) spreading the message and involving friends, colleagues and, broadly speaking, networks of different stakeholders. The emphasis given to actions, Action Developers’ efforts, media material produced and the consistent use of social networks reward participation and praise positive initiative. The importance of communicating the number of action highlights the work accomplished by EWWR participants as a whole, underlying the European dimension.

In 2014, around 12000 actions have been registered throughout Europe. Workshops, competitions, games, public meetings, music concerts, fashion runaways, book reading, parties… in a colorful and creative mood. The best actions of 2014 have been rewarded in Budapest during the EWWR Awards Ceremony, in the framework of a conference on circular economy which took place in May 2015. The first project edition of the EWWR (2009-2012) has also been awarded as the “Best of the Best” LIFE Information & Communication 2013.

From 21 to 29 November 2015, the seventh edition of the European Week for Waste Reduction will take place. The 2015 EWWR will focus on the issue of Dematerialization, under the slogan “DEMATERIALIZATION: DOING MORE WITH LESS”: using less or no material to deliver the same level of functionality to the user: from sharing economy to creative reuse, from eco-design to resource efficiency.

Those interested in helping spreading the message of waste reduction in a fun way are warmly welcome to the big EWWR community!

The Causes of the Great Recession n.2. The chicken or the egg?