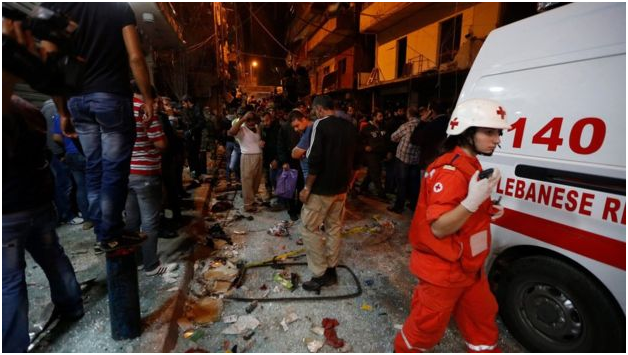 At 6pm, on November 12th, a day before the tragic Paris events, in a very busy street of the southern-Beirut suburb of Burj al-Barajneh in Lebanon, a men blew himself up in front of a Shia mosque when believers were leaving after prayers. Few seconds later, in the same street, another man blew himself within a bakery, killing, among the others, a third suicide bomber. At least 43 people died in the attacks and 240 remained wounded according to the press. The two suicide bomb attacks were later claimed by Daesh.[i]

Despite the different coverage of the news, the attacks in Beirut and those in Paris are very similar both in the targets and in Daesh intentions. Indeed, on the one hand they targeted civilians.[ii] On the other hand, at least one of Daesh intentions has been to strike the constituency of two of its enemies.

With regard to France, it has taken part in the aerial bombing campaign against Daesh in Syria, and particularly after November 9th, French airstrikes targeted Daesh-controlled oil supply centres.

Although Lebanon is actually one of the most important hosting country for Syrian and Iraqi refugees – according to UN estimates, the percentage of these refugees in Lebanon accounts for almost 30% of the native population[iii] – this is not the point. Burj al-Barajneh bombings were related to the role of Hezbollah in the fight against Daesh. The Shia Lebanese party, which was the only group to maintain its militias after the civil war, is indeed actively fighting in Syria creating some problems to Daesh territorial expansion. Hezbollah is in fact supporting the Assad regime, and the targeted neighbourhood is indeed an area where the Shia party is extremely popular.

The link is thus there. Generally speaking, Daesh is beginning to respond to its enemies attacks striking them back at home, and targeting their civilian population in order to instil terror. Moreover, it probably hopes that these attacks would push its current enemies to lower their military engagement in Syria while increasing repressive measures at home – especially against the Sunni Muslim population. This in turn would probably create the basis for more radicalisation, thus strengthening Daesh narrative and recruitment. Finally, this type of attacks could deter other states or actors not yet involved in the Syrian military scenario from taking armed action against Daesh – and that is true especially for democratic states, where the costs of military engagement and hence casualties is paid by politicians through the loss of popular consensus (votes).

Focusing on the peculiar Lebanese situation, these attacks recall to people’s mind the nightmares of the civil war. Not only these are in fact the deadliest bombings since the Taif Agreement, but there is also the risk that the deteriorating of the situation within the country of Ciders could ignite once again sectarian violence. Lebanon remains indeed a country highly divided, especially with regard to religious cleavages which often correspond to the socio-economic ones.

Still, it seems that Lebanese political actors are quite aware that Lebanon has the potentiality to become a Syria-like country, and it seems that the political forces of the Israel-bordering country have informally accepted the importance of Hezbollah role in containing Daesh expansion hoping to avoid the latter’s rise in the country.

[i] Throughout the whole article the term Daesh will be used instead of ISIS, ISIL, or IS. The choice has its motivation, and it is well explained by this article.

[ii] That is, one of the few commonly-agreed necessary conditions to define if an attack or an armed group could be labelled “terrorist” or not – a topic very contested in academia and elsewhere despite the massive and often inaccurate use of the term by some politicians.

The Erasmus Impact Study and its effects on the young