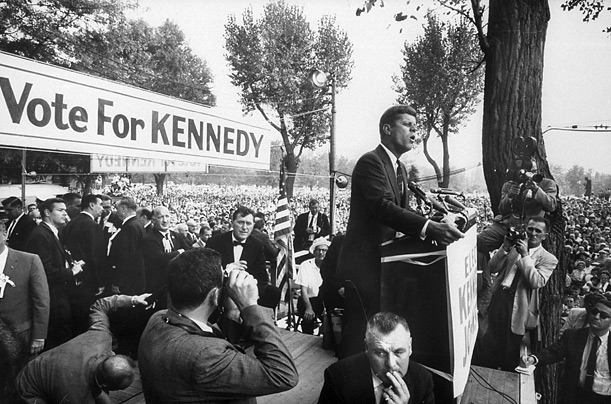 These article have been written during the elaboration of a university paper for the course “Parties and Government in the USA” thought by Emilie van Haute at the Free University of Brussels.

What most differentiated Kennedy from the previous presidential competitors was his religious belief. Indeed, he was the first Catholic president of the USA and his victory surprised the public of that period and incentivized several academics to study the connection between religion and electorate behaviors.

Kennedy, being catholic, had to fight two problematics related with his belief: Catholicism vs liberalism and Catholicism as a minority in a protestant-dominated world. The comprehension of both dimensions is necessary to understand the results of the presidential nominations and final elections.

In the first paragraph we will introduce Kennedy’s challenge in the cultural environment of the US of the 1960s. In particular, we will explain what kind of challenge Kennedy’s theological belief had to face in the ideological libertarian culture of the US.

In the second paragraph we will hypothesize, through a rational-choice reasoning, how Kennedy’s Catholic nature interacted with the other religions.

ANTI-CATHOLICISM IN US LIBERALISM VS KENNEDY

During the first half of the twentieth century, Catholicism was seen as a serious threat to religious liberty and to the separation between the state and the church. American liberals rejected the Catholic dogma and anti-catholicism at governmental institutions was widely spread in the US culture (Carty 2001: 581). To understand this, we can distinguish two main subgroups that catalyzed the debates around this topic: “libertarian absolutist” and “accomodationist liberals”.

On the one hand, libertarian absolutists considered the Roman Catholic Church as a dangerous threat to the First Amendment’s principle of absolute government. They were reporting that the Catholic Church could sharpen the national administration to favorize the Catholic religion through policies such as anti-birth control, public aid to Catholic schools or colleges and similar policies (Carty 2001: 579) [1]. On the other hand, accomodationist liberals believed that the First Amendament’s guarantee of religious liberty supported government assistance to the religions also at the institutional level. This does not mean that any religion should had been favorized over another one, but the complete separation between the state and the church could undermine all religious faith and promote secularism (Carty 2001: 581) [2].

So far, we understand that Kennedy’s campaign has been in the middle of strong tension within the US liberal factions characterized by a strong ideological fragmentation towards Catholicism.

In other words, he had to convince liberal skeptics without loosing Catholic voters. To attract absolutist liberals, Kennedy chose to compromise himself to the idea of a clear separation between the state and the church, excluding in any way favoritism of Catholic institutions through ad hoc policies. To keep the Catholics, he chose to defend their/his values even if they could appear to contrast with the liberal ideology. To face this controversial challenge, Kennedy appealed to his charismatic skills. We will give some examples. Prior to 1960, he has been questioned about the integrity of the educational system under a Catholic leadership. He showed that a Catholic belief does not compromise educational political autonomy, as he explains “There is an old saying in Boston that we get our religion from Rome and our politics at home” (Maier 2004: 283). Moreover, in 1958, the absolutist liberal Pail Blashard asked Kennedy and other Catholic presidential candidates to address three contentious church subjects: “the Catholic boycott of public schools, the drive of Catholic bishops for public funds, and the appointment of a Vatican ambassador” (Jenkins 2003: 40). In this case, Kennedy refused to respond directly through appealing to the Article VI of the US Constitution “no religious test shall ever be required as a qualification to any office or public trust under the United States”.

Kennedy succeeded in separating himself from the anti-catholic positions but without betraying his Catholic values. This lead him to win the Democratic presidential nomination with 52,69% against 26,84 of his opponent LB Johnson. With such advantage, the liberals were compacted under Kennedy’s leadership and the party solidarity silenced the remaining liberal critics (Carty 2001: 578).

A DIVIDED COALITION: THE MULTI-POLARITY OF TAKING ON ISIS