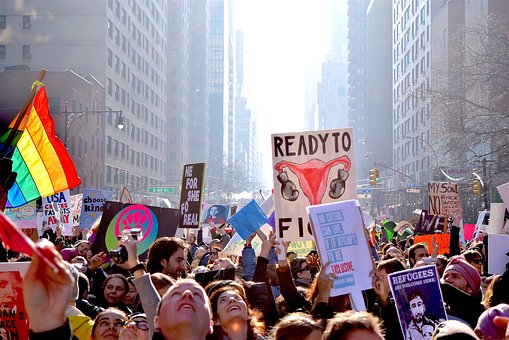 ‘The time of empty talk is over. Now arrives the hour of action. Do not allow anyone to tell you that it cannot be done.’

With these words, the 45th President of the United States of America, Donald J. Trump, concluded his Inaugural Address, swearing that the American Dream will soon be kicking again. The immediate need for action is something that non-governmental organizations and institutions, human rights activists and advocates, have been knowing for quite a long time.

However, as testified by the erasing of climate change, civil and LGBTQI rights webpages from WhiteHouse.gov, the signature of an executive order reinstating the “global gag rule”, and predictable statements on the proven effectiveness of torture, the action foreseen by the President will probably be quite different. With a political program, and controversial statements, that conquered numerous Americans with the promise of restored prosperity, words like equality, inclusion, solidarity, civil, political, economic, social, cultural and reproductive rights, will probably not find much space in the dreams Donald J. Trump told Americans they would, together, bring back home.

In a Presidential race that was followed in Europe as closely as in the USA, on the other side of the Atlantic, for some, the ‘Tycoon’ represented, and almost embodied, the crisis of institutions based on the ideals of democracy, the rule of law, and fundamental rights.

The President reminded the EU citizens of the debate on rising populism and xenophobia within their borders: an economic crisis far from gone, internal conflicts on the issue of migration, refugees and asylum seekers, and Countries that, especially in the Mediterranean area, still struggle with austerity (a recent survey showed that more than the 38% of the Italian population is currently struggling to pay for health care). Moreover, the disruption of a long seeked project seemed on its way when British citizens expressed their willingness to leave the EU, in an attempt for what was pictured as a vote to regain sovereignty and independence (even if almost immediately regretting their choice when realizing how many EU funds and contributions would soon be lost). These worrying symptoms draft a picture where institutions seem unwilling or unable to face their own fading.

The perceived distance between the EU and its citizens is increasing, slowed only by the so-called ‘Erasmus generation’, defining students, scholars, researchers and professionals studying, working and living abroad, first-hand experiencing the value of international exchange, solidarity and common growth: a true generation of Europeans. They are over 3 million, relatively young, driven, educated and leaning towards multiculturalism. For them, the restrictions on freedom of movement and its deriving rights are not even open for discussion.

This relatively young generation represents one of the strongest shields against setbacks, strongly advocating for respect and implementation of fundamental rights and coherent policies, aware that, within the EU system, human rights were a long and hard fought battle. In fact, at first, the EEC/EC was not particularly interested in fundamental rights. Even if they were, along with democracy and the rule of law, shared and desirable values, they were not seen as a priority in the light of European economic integration. On one hand, the Council of Europe (ECHR) system was considered as an adequate protection mechanism, on the other the principal judicial organ of the EEC/EC (now the Court of Justice of the European Union), generally interpreted the EEC/EU law in accordance with the ECHR and its jurisprudence. However, since the process of economic integration was tied to the supremacy of Community and EU law, and given that the national courts expressed concern upon the risks that this posed to national constitutional rights, the European Court started to develop its own human rights jurisprudence. Then, in 2001, with the Treaty of Nice, the Union was provided with its own formal statement of rights: the Charter of Fundamental Rights (EU Charter). Nevertheless, it was only in 2009 (Treaty of Lisbon), that the Charter became binding and, including a wide range of social, economic, cultural and citizenship rights, became the primary source of human rights in the EU, addressing not only member states but EU institutions too.

Nowadays, human rights may seem deprived of significance and concrete meaning: within general distrust, institutions, even if democratic, do not seem to constitute a sufficient guarantee. Criticisms may have always been following human rights, as legal and philosophical theories have long debated upon the justification, content and extent of fundamental rights and liberties. Traditionally dating back to the Magna Carta of 1215, and owing to fine European Enlightenment thinkers, it was in the Colonies that fundamental rights first saw mention in a Constitutional document: the US Declaration of Independence of 1776. In fact, as pointed out by the scholar Ed Bates, ‘the axe of rationalization’ enabled the transformation of human rights into positive law. The inclusion of a specific set of rights that were considered as naturally belong to each human being (even if it is necessary to note that women, for example, did not yet possessed the same recognition as men), soon reached Europe, where the French Declaration established a clear and everlasting link between institutional limitations on state power and the protection of human rights.

At present, the expectations that citizens have towards institutions, whether international or domestic, go rightfully far beyond negative obligations and require affirmative actions that will ensure that fundamental rights are fulfilled and implemented. Such awareness, fostered through adequate education and communication, even in the light of the recent EU crisis, is not to be underestimated. In fact, if as pointed out by B. Guetta in his recent article for L’Internazionale, Trump presidency may awake Europe from quite a long sleep, as our mutual concerns could lead to renovated energy and participation in the political and institutional dimension of the EU. Human Rights may then provide the starting point for a European rebirth, being as revolutionary as in the past, leading governments, policy makers, civil society, citizens and institution to discuss and reflect upon the foundations of every fundamental rights discourse: equality and dignity. Then, issues such as decent work and youth unemployment can be addressed and analysed under a light that does not only accounts for markets and economy trends, but gives human dignity a central role.

America’s future may stimulate the EU to rethink its values, differentiate, and seek political unity that will possibly translate itself in more international weight, economic power and the promotion of a societal model that fosters substantial and only formal equality and solidarity. In fact, in an economic crisis that has increased societal conflicts across Europe, the common fear is that equal rights for others translate into less rights for ourselves, meaning less wealth and opportunities. As a recurrent motto trending in the social media states, rights are not a pie, meaning that equality does not diminish your guarantees. Nevertheless, as austerity policies affect peoples’ daily lives, economic constraints worsen social tensions, and the fear of losing the ‘little that remains’ depicts foreigners as enemies, refugees as terrorists, and EU integration as a threat to sovereignty, if Europe decides to build a shared unity capable of going beyond the contingency of Trumps’ presidency, it is a matter of education, political willingness, and pie too.

Other Articles or news on: www.alternativaeuropea.eu